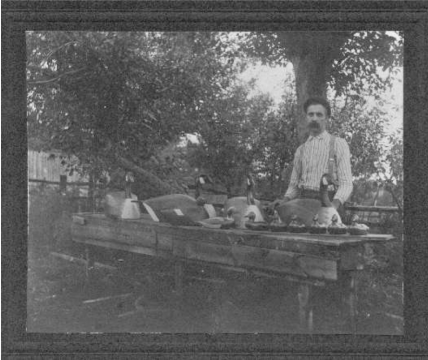 In 1802, the Town of Hingham authorized the construction of firehouses at Little Plain (Hingham Centre) and Broad Bridge (Hingham Square), although the responsibility to acquire the fire engines themselves rested with private citizens—the proprietors of Engine Companies No. 1 and 2.  The “hand tub” engines that they commissioned and paid for were large wooden tubs placed on carts for mobility and filled by hand from the nearest water source. Once the bucket was full, firemen pushed long wooden bars (“brakes”) up and down, setting in motion a piston in the tub that pumped the water out through a hose and nozzle.

Francis H. Lincoln wrote in the 1893 History of the Town of Hingham:

If one were to imagine a fire in those days he would see a company of perhaps fifteen men at work upon the brakes and attending to the hose and pipe, while a line of men and women stretched away to the nearest water, which they passed from hand to hand in buckets, emptying it into the tub, passing the empty buckets back by another line to be filled again.

This wooden tub is from the Little Plain Engine, No. 1, nicknamed the “Precedent” because it was the first of what would ultimately be four such engines to be completed.  It was manufactured by local craftsmen: Peter Sprague made the tub from cedar furnished by Thomas Fearing. The ironwork was by the local firm of Stephenson and Thomas.

In 1830, the Town’s first suction apparatus, the “Hingham,” was acquired and “hand tubs” or “bucket tubs” such as the Precedent became obsolete.

Hingham’s 19th century woodenware and cordage industries get most of the attention, but did you know that our town also made umbrellas and parasols?  By 1818, an umbrella factory was already in operation on South Street; its owner, Benjamin S. Williams, incorporated the Hingham Umbrella Manufacturing Company in 1825.

Edward Cazneau succeeded Williams as proprietor of the umbrella factory in 1828.  According to the 1893 History of the Town of Hingham, Cazneau announced in an inaugural advertisement in the Hingham Gazette that “all Umbrellas or Parasols sold here by retail will be kept in repair twelve months, gratis.”

The late John P. Richardson recovered several umbrellas from the attic of what had been Edward Cazneau’s home.  A note that he attached to the umbrella frame in the photo above reads, “Found in the attic of the Cazneau House on the east corner of South and Hersey St. Hingham, Mass. I, John P. Richardson recovered several umbrellas from this attic. Cazneau owned an umbrella factory at Hobarts Bridge, North St.”

By 1837, the Hingham Umbrella Manufacturing Ccmpany had 75 employees (20 men and 55 women) and, that year, it made and sold over 18,000 umbrellas. This success was not lasting, however; the umbrella factory closed five years later, in 1842.

When a local developer purchased the Rev. Ebenezer Gay (1696-1787) house at 89 North Street, local historian John P. Richardson participated in some pre-construction historical investigations.  These painted panels from the Gay house, later installed in the 1690 Old Fort House which Mr. Richardson owned and occupied, are now part of the John P. Richardson Collection at the Hingham Historical Society.

The first wall fragment is made of a plaster and lath surface attached to heavy vertical boards, which are in turn attached to two more modern boards horizontally laid.  The decorative side is painted a dirty off-white base with a meandering vine ad flower motif that originates out of a basket or planter decorated in a cross hatch pattern with dots in each diamond of the crosshatch.  The basket rests on a hilly green stylized landscape. The vine bears large, stylized acanthus-type leaves and flowers of varying shapes in red and blue. Five hand-cut nails protrude from the wall—two at the far left, one at the top center, one at the upper right, one at mid-right.

The second decoratively painted wall fragment consists of two layers of plaster and lath encasing two heavy vertical boards. The plaster side is painted with at least 2 layers of paint, the topmost having been added by a 20th century Gay family member seeking to restore the design.  The original background was green, while the background of the current surface layer is a dirty tan color.

A meandering vine motif climbs the panel, with the vine bearing red tulip-shaped blue lily-shaped flowers.  At right is a narrow border set off by a dark brown line.  Within the border the flower and vine motif repeats in a narrower scale. To the right of the border is an unfinished area of white plaster with two maroon colored squares of paint laid out in a windowpane pattern.

In his book, The Benevolent Deity: Ebenezer Gay and the Rise of Rational Religion in New England, author Robert J. Wilson III described the Gay house at it looked during the years that Ebenezer lived there with his wife, Jerusha (Bradford) Gay and their ten children:

The house was a 2-1/2 story, rectangular, pitched-roof affair, somewhat large for the period, but not ostentatiously so.  Though it was painted a rather austere blue-gray on the outside, the interior was lively and colorful.  Someone (Jerusha?) adorned the cream colored walls of the family sitting room with a free hand vine design, very like eighteenth-century crewelwork.  The woodwork, fireplace wall, and the wainscott (added later) were all painted a light green.  The whole effect suggested that nature’s god in all his vibrancy was very much alive in the Gay house.