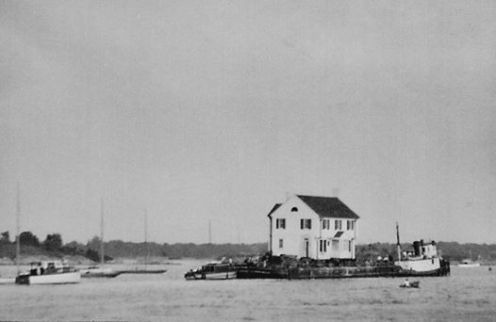 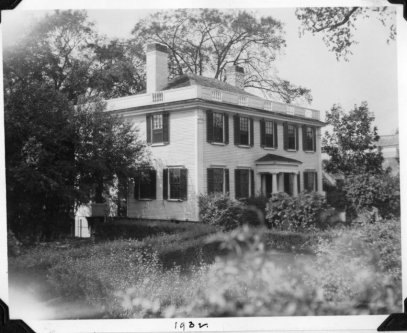 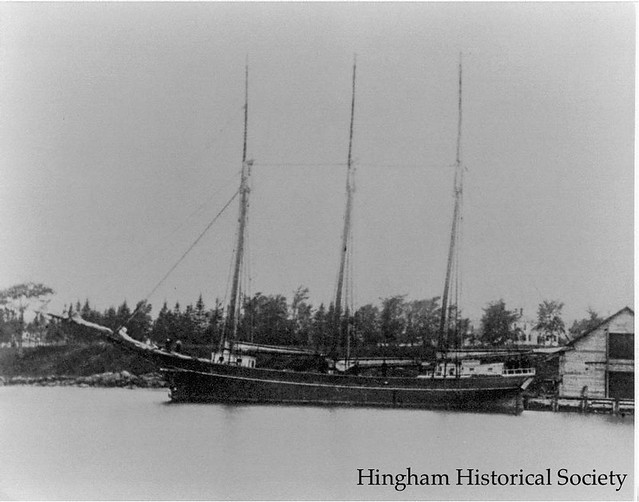 Between 1832 and 1841, forty vessels foundered on the rocks at Minot’s Ledge off Cohasset and Scituate, and in the late 1840s, a lighthouse was built on the ledge.  It was lit for the first time on January 1, 1850.

A fierce nor‘easter hit Cape Cod Bay on April 16, 1851, bringing with it the highest seas ever recorded to that time. Late that night, the newly-constructed Minot’s Ledge Lighthouse collapsed and toppled into the surf.

The lighthouse was manned that night by the lighthouse keeper’s two young assistants, Joseph Wilson and Joseph Antoine.  They kept the light burning into the night.

At some point in the evening, Antoine and Wilson placed a note in a bottle and dropped it into the waves below. The note was found the following day by a Gloucester fisherman.  It read:

The tide reached its height around midnight and around 1:00 a.m., the lighthouse’s bell was heard to ring repeatedly. Soon thereafter, the iron supports of the lighthouse snapped, and it toppled into the sea.

It appears as if Wilson and Antoine escaped the lighthouse structure into the water, although neither survived. Antoine’s body washed up at Nantasket; Wilson made it alive to Gull Rock in Cohasset Harbor but died of exposure before he was discovered the next day.

The note in the bottle was given to the Hingham Historical Society in the 1920s by a local historian from Gloucester.

The European powers were at war in the 1790’s and first years of the 19th century, and their war at sea posed obstacles to the United States’ young merchant fleet.   British seizure of American merchant ships and their cargoes and impressment of U.S. sailors into naval service was famously one cause of the War of 1812.

The law of the United States, France, and other European powers distinguished between a neutral vessel and one sailing under the flag of an enemy state, but 18th century British law—as applied by the Royal Navy and privateers—allowed “enemy goods” or “contraband” on a neutral vessel to be seized as a “prize.”

In 1797, Britain was at war with revolutionary France and its ally Spain.  In April of that year, the American merchant ship West Point was en route from Charleston to Havana when it was seized by three British Navy vessels, HMS Squirrel, HMS La Raison, and H.M. Brig Swallow.  They escorted the West Point to port at Nassau, “in order that the cargo might be adjudged and condemned as lawful prize to the captors.”  A libel in admiralty was filed on behalf of the commanders, officers, and crew of the three  vessels, who would participate directly in any recovery.  The commanders claimed “[t]he Cargo of the American Brigantine West Point and every thing on board of her ladened and contained subject to condemnation and inspection as being contraband” or property which “at the time of capture belonged to the king of Spain or his vassals or subjects or some person or persons inhabiting within the territory of Spain.”

The Admiralty Court examined evidence including markings on the goods, invoices, bills of lading, and statements from the crew and, on May 3, 1797, issued its decision, preserved in our archives.  Some but not all of the cargo was awarded to the British officers as their “prize.”  The Court held the libel supported (i.e., it decided that the Americans had not been able to prove that the seizure was unlawful) as to three categories of property.

First, the British were awarded a portion of the ship’s cargo, including 110 pieces of “osnaburg,” a coarse linen cloth manufactured in Britain; 45 iron pots, a barrel of earthenware, and a crate of cheese.  These goods had no customs mark and the ship’s captain could not produce any invoices or bills of lading for them.  Second, they were awarded a “large trunk of sundry articles” belonging to the unfortunate but otherwise unidentified “Francisco Selgado,” as well as other items owned by West Point crew members who presumably were Spanish subjects.  Third, and probably most valuable, they were awarded 19 coils of rigging cordage, 153 barrels of tar, 17 barrels of pitch, 1 bundle of steel, and 9 casks of lead which, the Court found, were being shipped by the American crew “contrary to their neutrality as subjects of the United States.”  These items presumably fell into the category of “contraband,” or items of material assistance to Spain’s war efforts.

From the naval officers who populate Jane Austen’s novels to Horatio Hornblower to Master and Commander, the figure of the ambitious young man joining the Royal Navy to make his fortune is a familiar one.  The “prize” system helped those men accomplish that end.  The officers of the Swallow, Squirrel, and La Raison did gain from the seizure of the West Point, although none of them made a fortune that day.