As we wilt in the summer heat people everywhere are flocking to the beaches, a time honored tradition throughout most of the world.   Today we can choose what we wear to the beach.  This was not always the case. 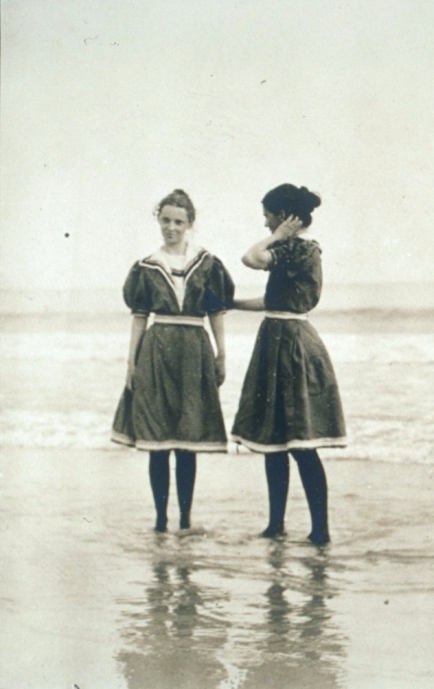 In the late 19th and early 20th centuries, dress codes for beachwear, particularly women’s, were very strict.  Women wore bathing costumes that consisted of two or three pieces of clothing often made of heavy black wool.  A two-piece ensemble consisted of a knee-length dress with sleeves and a collar, often in a sailor style, and bloomers or pantaloons underneath.  A three-piece outfit had a top, again often in a sailor style, a skirt, and pantaloons. They were worn with cotton stockings and lace up “slippers” made of embroidered serge (a kind of wool) or flannel.  Head coverings were also worn: either some kind of hat or cap or a kerchief knotted around the head.  These bathing costumes could sometimes contain as much as nine yards of wool!

There were a number of reasons such cumbersome outfits were worn.  The main reason was modesty, although taking good care of a pale complexion was also considered very desirable.  Curiously, heavy warm bathing attire was also considered necessary because the seawater was cold!

Horse-drawn bathing machines were in common use on many public beaches.   These were huts made of wood, or sometimes just a wooden frame with canvas sides, that were 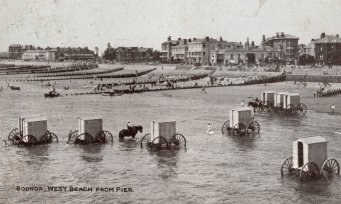 on wheels.  They were used for changing into bathing costumes from street-wear and were drawn into the water by horses.  There were steps down into the ocean so a woman could go directly from the bathing machine into the water, thus protecting her modesty.

Encased in nine yards of wet wool, often further weighed down by weights sewn into the hem to prevent the bathing dress from rising in the water, women found “swimming” a challenge and thus contented themselves with “bathing.”  At many beaches, a rope was be attached to an offshore buoy.  Women would hold onto the rope and jump up and down in the waves!

By 1907 the popularity of “swimming” had increased and women were frustrated by their cumbersome costumes. When an Australian professional swimmer, Annette Kellerman, came to the U.S. , she wore a form-fitting swimsuit fashioned from a man’s swimsuit (form-fitting pants and pull over shirt).  She was arrested at Massachusetts’ Revere Beach for indecent exposure!  However, women demanded similar swimsuits for themselves and Kellerman soon started a company manufacturing them.

In reaction to these more “indecent” costumes, in the early 1920s, swimsuit laws were passed regulating the amount of skin a woman might expose at the beach.  Swimsuit police patrolled the beaches with tape measures to check any beachwear that didn’t conform, and women were arrested for showing too much skin. 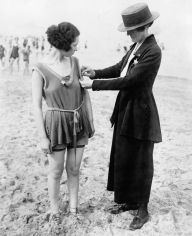 By the ‘30’s different, stretchable fabrics were developed and, happily, swimsuits began to become more like those we wear today.

The pop-up exhibit at the Hingham Historical Society currently shows some beach attire worn by young women from Hingham around 1900. We hope you’ll stop in to take a look.