U.S. Navy, Enlistments at Boston in 1862.  Henry Trowbridge of Hingham.

The war was in its second year. The month before President Lincoln had put out an urgent call for additional troops, and the town had rallied to meet its quota. On July 25, 1862, the Hingham Journal printed a powerful appeal that included increased bounties:

Within days of the newspaper notice, our three Hingham Centre boys enlisted, and the village must have been a hive of activity as family and friends gathered to wish the young men well. Benjamin and Henry were first cousins and related to George through the old Massachusetts families. 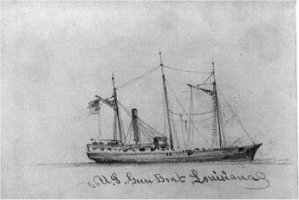 After several months of training in the north, the three young men left for the sounds of North Carolina aboard the USS Hetzel, a side-wheel steamer, chartered to maintain blockades on southern ports. In North Carolina, they transferred to the gunboat USS Louisiana, “five guns,”2 whose mission was to intercept blockade runners and support ground troops. The ship was crowded and damp, the weather humid and, in addition to the enemy, sailors fought the plethora of diseases that haunted ships. At some time that winter, George Merritt got sick. Suffering from intense fevers and chills, he was moved to a hospital in North Carolina. On February 7, 1863, he died of “swamp fever” and was buried “from the hospital.”2 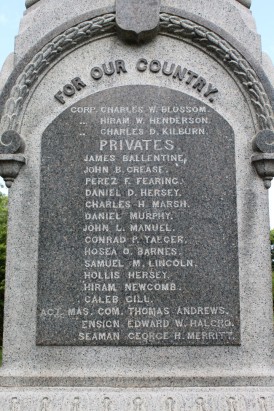 A letter or telegram carried the news north. Adding to his parents’ grief was the fact their son was buried so far from home. They would eventually place a memorial headstone in the First Parish Cemetery in Norwell,3  and George’s name would be inscribed on the Civil War Monument erected by the town after the war. The publication produced for the monument’s dedication, details his service and asks: “Is his sleep less sweet in the land where the wild wind swept him, than if soothed to rest at home, and kin and friends had wept him?”2

Benjamin and Henry remained aboard the USS Louisiana through the winter, and in April 1863, they took part in the sea and land battle at Washington, North Carolina. In August, their service complete, they were discharged and “granted passage home.”2 It must have been a subdued homecoming—of the three young sailors who had left the year before, only two came home. And Henry was ill. The Hingham Journal reports the homecoming:

Henry Trowbridge has been confined to his father’s residence with fever, is getting better. Benjamin Jones has enjoyed good health since his return from the U.S. gunboat Louisiana, which were blockading Washington, N.C. The young and noble Merritt was one of the three from here in their company; his bones now rest on Southern soil, but his soul is in heaven.

At war’s end, Henry went to work with his father in a meat market in Hingham Centre. He married, moved out of his parent’s house on School Street, and built a house at the corner of Pleasant and Union streets. After the untimely death of his wife, Mary Ordway Trowbridge, he married Hannah Ferris, an Irish immigrant, and had five children. In addition to rebuilding the house at 51 Pleasant Street after it burned to the ground, he built two houses on Union Street, the one at 11 Union survives. Throughout his long life, he lived to be 87 years old, he was involved in the work of US Grand Army of the Republic post, which Civil War veterans started after the war.  When he died in 1930, he was remembered as “one of the oldest GAR men in the State.”4

Meg Ferris Kenagy is a freelance writer who grew up in Hingham, Massachusetts. She is the author of The House on School Street, Eight generations. Two hundred and four years. One family.

On September 18, 1933, under the headline, “Railroad Tracks Washed Out During Storm Last Sunday,” the Hingham Journal reported:

Fully 500 feet of the New Haven tracks running from Hingham to Cohasset under the bridge of the Cohasset-Hingham new road were washed out and all trains held up during the height of the heavy gale and rain storm on last Sunday afternoon.

The break in the track was discovered by Daniel Magner, who told his grandfather, Thomas Magner, who in turn notified the railroad officials.  The last train over the line before it gave way was at 11:02 A.M.  The 2:52 P.M. from Boston carried just one passenger, who was transferred at the washout in an automobile. A downpour of water carried away enough roadbed to undermine about 50 feet of track.  Part of the track hung suspended in the air and part gave way. A full wrecking crew was called into action at once and work was continued all Sunday night. . . .  The force of the water took telegraph poles along with it, temporarily causing telephone disruption.  This was speedy repaired so that little inconvenience was caused.

The scene was viewed by thousands, police being on duty at the bridge to keep traffic moving.

The storm that took out the railroad embankment is not as locally famous as the Hurricane of 1938 or 1954’s Hurricane Carol, both of which devastated the Northeast.  Later named the “1933 Outer Banks Hurricane,” it travelled from the Caribbean up the East Coast and into Canada between September 8-18, 1933.  It was the 13th storm of the Atlantic hurricane of the season that year.  The 1933 Atlantic hurricane season was one of the most active recorded, with the highest aggregate combined accumulated cyclone energy score (a measure used by NOAA to express cyclone activity through an approximation of wind energy) from 1851 (when hurricane activity was first recorded) to date. 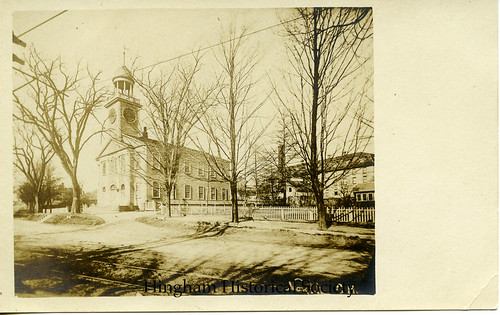 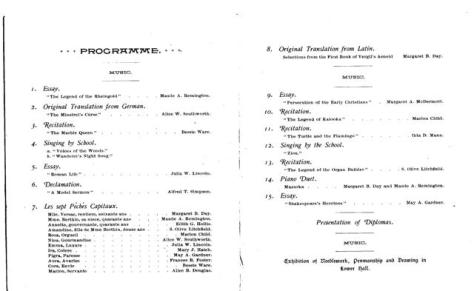