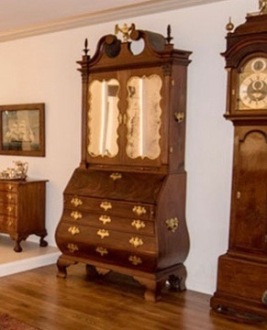 This beautiful drop-front desk and bookcase, newly installed in the Kelly Gallery at the Hingham Heritage Museum at Old Derby Academy, was built for Martin Gay (1726-1807) and Ruth Atkins Gay (1736-1810) upon their marriage in 1765 by cabinetmaker Gibbs Atkins of Boston, Ruth’s brother.

Called “the Old Tory” in acknowledgement of Martin Gay’s political leanings, the desk travelled to Nova Scotia with Martin upon the evacuation of Boston in 1776.  Many Loyalists were unable to bring larger pieces of furniture when fleeing, but Martin Gay owned a ship which made it possible for him to move the piece such a distance. Because Martin was a deacon of the West Church in Boston, he was charged with protecting the church’s valuables during the British occupation. Martin filled the drawers and shelves of his secretary desk with linen and silver communion service for safe keeping while exiled in Nova Scotia.

In 1788, Martin made a trip to England with hopes of procuring an indemnity for his losses as a Loyalist. Once again, “Old Tory” made the trip with Martin as he stayed in England for two years. Upon his return to Boston in 1792, Martin brought “Old Tory” back with him, filled with the linens and silver communion service to be returned to the West Church.

When Martin died in 1807, Ruth moved to the Gay family home on North Street in Hingham and lived there until her death in 1810. The desk descended in the Gay family until Ebenezer and Diana Gay donated it to a grateful Hingham Historical Society in 2014. 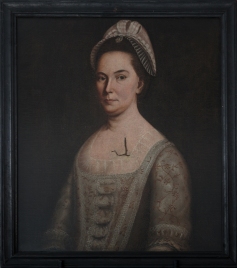 One of our Society’s co-founders, Susan Barker Willard, bequeathed a treasure trove of art, furniture, and documents which she had inherited from her Barker, Thaxter, and Willard family ancestors. Much of it has furnished our 1688 Old Ordinary house museum since the early part of the last century. Two paintings in particular have always been favorites, especially on the fifth grade school tours that are a rite of passage in the Hingham Public Schools.  They are a pair of 18th century oil portraits of Henry and Christian Barnes of Marlborough, Massachusetts.

Henry Barnes had no family connection to our town of Hingham, but Christian had friends and relatives here.  Her mother’s family were Barkers from the South Shore. Henry was a distiller, manufacturer of pearl ash (an early chemical leavener), and trader in British manufactured goods. They were Loyalists and forced to flee Marlborough for England in late 1775 after some violent incidents (including, it has been reported, the tarring and feathering of Henry’s horse). The Barnes portraits are each damaged in the chest area, and the lore is that the portraits—left at their estate—were the victims of Marlborough patriots.

Members of Marlborough’s financial elite, the Barneses owned three slaves in the early 1770s. Thanks to Christian’s prolific correspondence, we have known for some time that Prince, the son of their slave Daphney, was a talented artist. (Prince’s mother, Daphney, features in a set of letters in our archives. She was the subject of an earlier post in this blog, “A Letter from Daphney.”) In the first letter that mentions Prince, Christian writes, that “Prince is here and I am sitting to him for my picture.”  A month later, in November 1769, she reports that Henry has purchased Prince, with a view towards “improving his genius in painting.”  From there, Christian’s appreciation for Prince’s talent grows.  In an early 1770 letter, she reports that he is

a most surprising instance of the force of natural Genius for without the least instruction or improvement he has taken several faces which are thought to be very well done. He has taken a copy of my picture which I think has more of my resemblance than Copling’s [sic].

(She is referring to John Singleton Copley, a colonial American painter famous for his portraits of 18th century Bostonians.)

The original manuscripts of Christian’s letters are at the Library of Congress, but we are lucky to have, in our Old Derby Academy archives, a set of typescripts made in the early 20th century—also the gift of Susan Barker Willard.  In her letters, among her friends, and even in a set of newspaper advertisements, Christian passed the word about Prince:

As soon as the roads are tolerable I propose going to Boston in order to recommend our Limner to the Publick. I should be glad to have your judgment as to his performance and likewise your advice how I shall proceed with him. He has taken five pictures from the life since his return. Three of them as good likenesses as ever Mr. Copling took. I am in no doubt but he could coppy a picture as well as anybody in the Country.

Christian’s enthusiasm made it impossible for us to stop thinking about Prince the painter—particularly since our two Barnes portraits were painted in the 1770s and were unattributed.  We continued to learn more about Prince and his remarkable life but were unable to connect the dots between Prince and the Barnes portraits. (The paintings are unsigned and when they were restored in the 1930s a heavy layer of masonite was placed over the back of the canvas, obliterating any obvious clues. 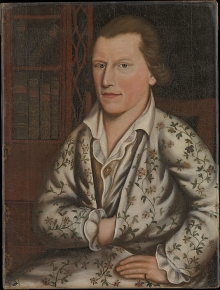 In late 2013, the Metropolitan Museum of Art in New York opened an exhibit called “Interwoven Globe,” on the 18th century international trade in textiles. The exhibition included a modest portrait of a Scottish textile merchant, painted in 1773 and signed, on a stretcher on the back of the canvas, “Prince Demah Barnes.”

We got in touch with the Metropolitan and were able to share what we had learned about Prince. The Metropolitan invited us to bring our two portraits to its Paintings Conservation Department, where they were examined using x-radiographs and infrared reflectography. The Metropolitan concluded that its signed painting by Prince and our two Barnes portraits were all by the same artist.  We have co-authored an article about the three paintings which appears in this month’s issue of Antiques magazine.

Prince enjoyed a short professional painting career before the Revolution changed the lives of Christian, Henry, and Prince.  Christian and Henry fled and Prince enlisted in the Massachusetts militia as a free man–Prince Demah (no more “Barnes”)–and served as a matross. He died, likely of smallpox or other disease, in March 1778. As “Prince Demah, limner,” he wrote his will, leaving all he had to Daphney. 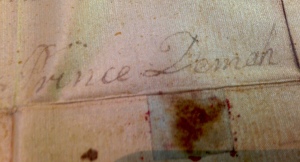 These three portraits by Prince Demah are the earliest known paintings by an African-American to be located and identified. It appears that Prince was only allowed to focus on his art for around ten years, but we know that he made other portraits as well—in oils and with “crayons,” or what we call pastels today. The next step: seeing if we can identify any more of his paintings.  As we at the Hingham Historical Society now know, one (or two) of them could be  found just about any place.

General Benjamin Lincoln may have stood in for General George Washington at Yorktown, accepting Lord Cornwallis’ sword, but not all of his Hingham neighbors and friends were on his side in the Revolutionary War.  A letter in our archives from Deborah Barker of Hingham describes the reception the newly inaugurated President Washington received when he visited Boston in October 1789–and leaves no question about what she thought of the new republic and its chief executive.

Washington  toured the New England states in the fall of 1789, arriving in Boston on October 24 to an elaborate public celebration.  As pictured below, a triumphal arch, designed by Charles Bulfinch, was constructed in Washington’s honor at the west end of the Old State House, over what was later renamed Washington Street. 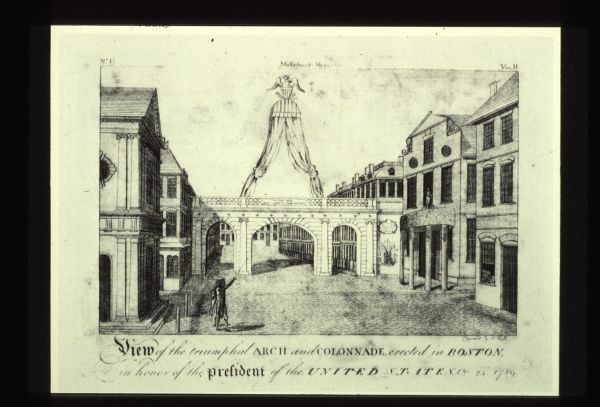 Engraving published in Massachusetts Magazine in 1789. Caption on the picture reads, “View of the triumphal Arch and Colonnade, erected in Boston in honor of the President of the United States, Oct. 24, 1789.”

Deborah Barker, one of three daughters of loyalist Joshua Barker, who fought for the Crown in the French and Indian War, was not among those impressed. She had been in Boston when Washington arrived and reported to Christian Barnes of Bristol, England, her mother’s cousin, that “[t]he General as President of the United States (or in other words as the King of America) thought proper to visit the northern part of his territories.”  She continued in the same sarcastic vein:

. . . Such a movement could not be performed secretly. It was no sooner announced that he intended visiting Boston than every breast beat with rapture, joy, and exultation. The mechanicks were employed, some in erecting triumphal arches, some in painting flags expressive of their several branches of business, which the most respectable of the order were to carry forth . . . . All of the superior orders were busy in forming addresses expressive of his transcendent merit, and their great love and respect for him. The poets in writing odes and other poems asserted their abilities. . . . The military were all in motion and made a superb appearance. Thus after a week’s preparation and expectation the great the important day (in honor of which everything that an infant world could do was to be done for the Man that many of them fancyed themselves under the greatest obligation to) arrived. The people met in the Mall, formed themselves into a regular processing, each man following the flag bearing a device expressive of his employment, first the merchants, then the clergy, doctors, lawyers, & sea captains, the mechanics alphabetically, thus proceeded by the select men (they you know must always be first) they marched down prison lane and up the main street . . . .

Barker knew she had an appreciative audience for her colorful description. Christian Barnes and her husband, Henry, had been forced to flee Massachusetts in 1775 because of Henry’s British trading activities and had forfeited their substantial estate.  Banished by an Act of the General Court, they had settled in Bristol. Portraits of Christian and Henry Barnes hang in the parlor of our Old Ordinary House Museum. Christian’s has two slashes across it and Henry’s a hole in the middle of the chest; tradition claims that these inflicted by the Marlborough patriots who seized the Barnes estate. It is through Deborah Barker that these paintings came to rest in Hingham.