Old letters open a window to the past. There isn’t a genealogist or historian who doesn’t yearn for them. And for good reason: letters carry the voices of our ancestors, they tell us a story. They illuminate our history.

One such letter, written on May 1, 1830 by Hingham resident Benjamin Thomas, Jr., to his uncle Martin Cushing in Maine, contains “sorrowful” news. It relates the death of Martin’s older brother Adna, who died the day before. The story it tells is of working conditions, medical knowledge, and a community caring for its own.

By way of background, Martin and Adna, sons of Isaac and Mary Cushing, were born in Hingham in 1788 and 1785, respectively. Descended from Matthew, the first Cushing to settle in town, they grew up in Hingham Centre, working on the family farm and in the sawmill. As adults, they entered the trades: Adna became a stonemason, Martin a bricklayer. In 1810, Adna married Sarah Leavitt and built a house at what is now 63 Pleasant Street; within a decade, he had moved his family to Leominster. Martin married Susan Thomas and moved to Maine.

In the letter, Benjamin recounts the facts of Adna’s death. He does not indulge in emotion or offer sympathy. From it, we learn that, in the winter of 1830, Adna worked indoors as a stone mason and that “the dust gave him a bad cough.” We learn that spring brought bad weather: there were “3 weeks of easterly winds and mist, by which [Adna] took a bad cold.” We learn that at the tail end of April, while working on a job in Charlestown, Adna fell violently ill and died. We learn he “labored” within days of his death.

When he died, his body “was brought to Hingham by a sail boat,” and “he was buried from M. & F. Burrs house” on the day of his death.

What the letter doesn’t tell us is that Adna was only 44 years old when he died. It doesn’t say how his wife and children learned of his death. Knowing he was buried the day he died, we understand that he was in the ground before most people knew he was dead. We see that immediately following his death a group of friends or co-workers carried his body from Charlestown to Hingham by sailboat. We know the news was rushed to Hingham Centre, and that the Fearing Burrs opened their home for an unexpected funeral. We realize that, in a matter of hours, a coffin was acquired, a gravedigger found, and a minister fetched. We are left to imagine the ripples of grief that spread across the villages and towns as friends and family heard the news.

Martin died seven years after his brother and is buried in Maine. How the letter survived is not clear as his widow is believed to have remarried and moved west, but it was handed down through the Cushing family. Thanks to the letter, we have a better idea of what it was like to live in Hingham in 1830.

Benjamin Thomas Jr. (1799-1854) was a nephew of Susan (Thomas) Cushing, Martin Cushing’s wife. He was the son of her brother, a gunsmith who lived in Hingham Centre. Lincoln, George et al., History of the Town of Hingham, Massachusetts, Vol. III (Genealogical), 1893. Pub. by the Town.

A copy of the letter from Benjamin Thomas Jr. to Martin Cushing was shared with me by researcher Margie von Marenholtz.

The Capt. Adna Cushing house at 63 Pleasant Street was built in 1811, according to the Hingham Historical Commission, Inventory of Historic, Architectural and Archaeological Assets. On Adna’s move to Leomister, see Cushing, James Stevenson. The genealogy of the Cushing family, an account of the ancestors and descendants of Matthew Cushing, who came to America in 1638.1905. Montreal, The Perrault Printing Co.

On M. & F. Burr’s house: Fearing Burr Sr. (1778-1866) had a store and home in Hingham Centre. Lincoln, George et al., History of the Town of Hingham, Massachusetts, Vol. III. Ibid. Adna is buried with his parents and his wife in Hingham Centre Cemetery. Note: His gravestone says he was 45 years old when he died; he was 44, in his 45th year. 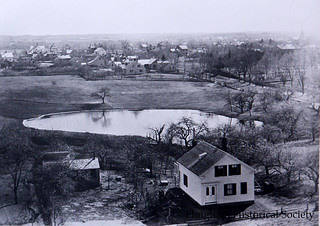 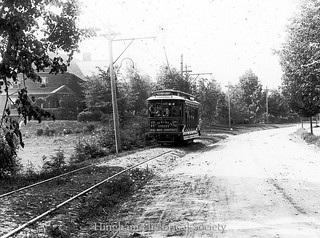 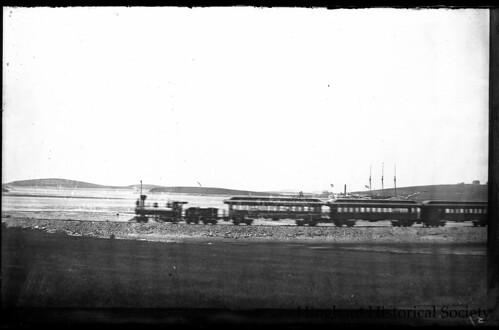 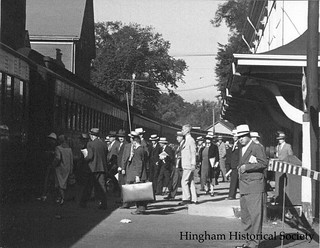 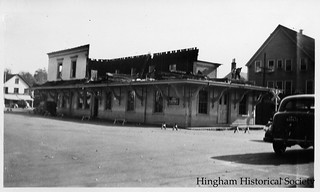 Autograph albums were all the rage in mid-19th century America—and Hingham was no exception.  We have a collection of the small books in which Hingham boys and girls exchanged signatures, messages, and verse during the 1860s and 1870s.  The albums themselves came in all shapes and sizes–the boys’ albums more conservative  and the girls’ more elaborate, with illustrations, decorations, and fanciful covers.  Willie Leavitt’s album was compact and business-like,

but the photograph below does not do justice to Minnie F. Burr’s autograph album, which was covered with deep-pile, chartreuse green velvet with the word “Album” inlaid in shiny celluloid letters.

Some boys and girls (mostly boys) simply signed their names in their friends’ albums but many penned a few lines of poetry or prose.  As would later be the case with high school yearbook inscriptions, there must have been some pressure to write memorably, and to meet this need, collections of autograph album inscriptions were published.  The Album Writer’s Friend, a copy of which is in our archives, helpfully asked,

Who among the readers of this preface has not been invited to write a few words of sentiment in the Albums of a friend? As an aid to the many thousands who have received this invitation and have not known what to write, we offer this collection of choice verse and prose . . . embracing sentiment, affection, humor, and miscellany . . . .

Its offerings ranged from the florid–

Our lives are albums, written through
With good or ill—with false or true—
And, as the blessed angels turn The pages of our years,
God grant they read the good with smiles
And blot the bad with tears

The young people of Hingham did not appear to have needed much help, and the entries they made in their friends’ albums sound original and genuine, whether penned in verse (like Maud Cushing’s entry in Lizzie Hersey’s album, April 8, 1876),

or with a touch of sophistication (like Eliza Cushing’s perfect French in Hattie Cushing’s album, August 14, 1863).

Otis Remington’s humor, penned in Minnie Burr’s album on April 23, 1879, is corny but funnier than The Album Writer’s “humorous” suggestions:

And inside jokes must have been as prevalent then as they are now:  who knows what Frank Pollard meant by this vaguely ominous note made on April 4, 1872 in Willie Leavitt’s album?

These Hingham young people left often-endearing reminders of their daily life and friendships in their autograph albums.  They never imagined that their schoolroom would become an historical society’s archives or that these notes exchanged among themselves would survive as “artifacts.”