The Old Ordinary, our 1688 house museum, opens on June 13, 2017 and, for a second season, you can come see our Old Ordinary Summer Exhibit, “Isaac Sprague and American Botany.” While the exhibit devotes significant attention to Isaac Sprague’s Hingham roots and continuing connections with our town, it also addresses his prolific career as a botanical illustrator which is the source of his lasting fame.

In the 1840s Sprague left Hingham and moved to Cambridge, where he worked with influential botanists, including John Torrey (1796-1873) and Torrey’s pupil, Harvard professor Asa Gray (1810-1888), who is often referred to as a “father of American botany.”  In the mid-19th century, American botany was undergoing a period of intense growth and development into an academic discipline seeking a unified understanding of North American plant life that would match the highest standards of then-current European scholarship and complexity.  An important part of this process was the publication of complete and authoritative works describing the plant life of this continent—with clear, detailed, and accurate illustrations.  Sprague’s talents were ideal for the task.

Sprague first produced the illustrations for Asa Gray’s 1845 Lowell lectures at Harvard and then assisted with several comprehensive botanical volumes over the course of the 1840s and 1850s. His illustrations were scientific tools first and aesthetic objects second:  Sprague considered himself to be a naturalist or delineator rather than describing himself as an artist. In the preface to his 1848 work Genera of the Plants of the United States, Professor Gray described “the scientific insight and careful investigations of Mr. Sprague, as well as . . . his skill and accuracy in delineation.”  In his private correspondence, he reported that Sprague was studying botany and the natural sciences, underscoring the technical knowledge the work required.

Sprague contributed plates and engravings to over 40 works of botanical, horticultural and naturalist interest over this part of his career. The writers with whom he worked included not only Torrey and Asa Gray but also William Oakes (1799-1848), George Emerson (1797-1881), George Goodale (1839-1923), and others.  (The illustrations in this blog post are plates from George Emerson’s 1838 Trees and Shrubs of New England.) 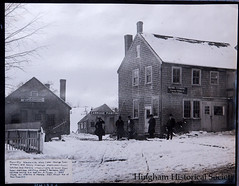 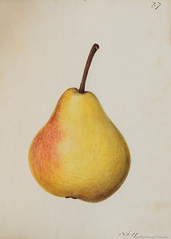 Today is the 300th anniversary of Madame Sarah Derby’s birth and a good time to post about a woman whose name looms large in Hingham history—and legend.

Born Sarah Langlee, daughter of a Hingham tavern keeper, she married well—twice. Her first husband was Dr. Ezekiel Hersey, a prominent and affluent Hingham physician. After his death, she married Richard Derby, a wealthy ship captain and merchant from Salem. (Richard Derby built Salem’s Derby Wharf in the 1750s.) She outlived Captain Derby as well and returned to Hingham to live on the large farm she inherited from Dr. Hersey.

Local legend created from this a “rags to riches” story (in their Hingham history Not All Has Changed, Francis and Lorena Hart dub Sarah Derby “Hingham’s legendary Cinderella”):  a beautiful young girl growing up poor on the islands of Hingham Harbor, whose names—Ragged, Sarah, and Langlee—described her as a young girl.  Edward Rowe Snow, in his History of the Harbor Islands, put to rest the idea that the islands were named after “ragged Sarah Langlee,” however; these islands bore those names on nautical charts as early as 1700–well before Sarah Langlee was born.

But her portrait (made in later years) suggests youthful beauty, as do perhaps the two good marriages.  When he died in 1770, Ezekiel Hersey left his substantial estate to his wife on the condition that she give £1000 to Harvard College.  Sarah Derby added to this her own bequest in the same amount, and together their gifts endowed the Hersey Professorships of the Theory and Practice of Physic and of Anatomy and Surgery at Harvard, laying the foundation for the establishment of Harvard Medical School.

She remarried, to Captain Richard Derby, in 1771.  It is also a common misconception that this second marriage is what made her a wealthy woman.  In fact, she waived her dower rights when she married Captain Derby, who left his fortune to his family and bequeathed to Sarah Derby only an annual income (and two slaves, also commonly glossed over in legend).

When she returned to Hingham in 1783, Madame Derby was persuaded to endow a new school for Hingham. The school would be co-educational (one of the first co-educational schools in the country) for the instruction of boys “in the Latin, Greek, English, and French languages, and the sciences of Mathematics and Geography” and girls “in writing, and in the English and French languages, arithmetic, andthe art of needlework in general.” As discussed in a prior post (“A Trip to the Principal’s Office—in 1799”), a single preceptor had the charge of both sexes, although a “sensible, discreet woman” taught the girls their needlework.

Madam Derby died in 1784 and is buried in Hingham Cemetery, not far from the site of her school. She provided further funding for the school in her will and instructed that her clock and her portrait (the one appearing at the top of this post) be placed in the school building. The original school building was replaced, in 1818, by a Federal-style structure—Old Derby Academy, current home of our Hingham Historical Society.

One hundred years ago today, on April 18, 1914, the Town of Hingham joined Derby Academy in celebrating Madame Derby’s bicentennial. A “Birthday Celebration” was held in her honor at Loring Hall. The program for the evening’s entertainment, preserved in our archives, included a local chorus, the Martland Band, from Brockton, English and Latin declamations by alumni, and poetry, essays, and other literary and musical offerings.

“To All Christian People to whome this present instrument shall come Greeting,” this deed in our archives opens magisterially.  The date at the bottom is equally impressive:   July 4, 1690, “Anno Regni & Regina Guilielmi & Maria Secundi” (in the second year of the reign of King William and Queen Mary).  The deed is executed by William Stoughton, “of Dorchester in the Colony of the Massachusetts Bay in New England,” and conveys several parcels of land in the vicinity of Broad Cove to Thomas Thaxter “of Hingham in the Colony aforesaid, yeoman.”  Stoughton is acting on behalf of “the Governor and Company established & residing in the Kingdome of England for the propagation of the Gospel to the Indians in New England &c.”

In addition to his service as a judge during the Salem witch trials (see our prior post about this document, “William Stoughton’s Seal”), and later service as first Chief Justice of Massachusetts’ Supreme Judicial Court, Stoughton was Lieutenant Governor of the Colony in the 1680’s and early 1690’s.  Among his many other public positions was Commissioner, and later Treasurer to the Commissioners, of the Company for the Propagation of the Gospel to the Indians in New England and the Parts Adjacent in America, a company chartered by Parliament in 1649 to support the conversion of New England’s native people.  The Company originally made investments in England and sent the income to the colonies, to be used to support conversion efforts, including John Eliot’s 1663 translation of the Old Testament into the Massachusett language, the creation of settlements for the so-called “Praying Indians” (including present-day Stoughton, Mass.), and other missionary activities such as the creation of a short-lived “Indian College” at Harvard College.  (These efforts may be familiar to readers of the recent historical novel Caleb’s Crossing, by Geraldine Brooks.)

Poor returns on investments in England (including losses owing to the Great Fire in London) led the New England Company to start to send capital for investment in the colonies.  The task of finding suitable investments fell to Stoughton.  Two such investments, made in 1683, were loans of £50 each to Simon and Joshua Hobart of Hingham, sons of Captain Joshua Hobart, nephews of the Rev. Peter Hobart, and both identified as “mariners.”  The loans were secured by real estate in Hingham and, according to the legal structure of the day, evidenced by deeds conveying the parcels to Stoughton, upon the condition that if the greater sum of £66 was repaid four years hence, in 1687, the sale would be null and void.

It is not clear what happened to the younger Joshua Hobart’s land but, on July 4, 1690, Stoughton sold the land he had “purchased” from Simon Hobart to Thomas Thaxter, for the inappropriately small sum of £4.  In all likelihood, this sale to Thaxter was part of some larger transaction, of which we know nothing.

How did Stoughton come to loan the New England Company’s funds to the Hobart brothers?  Stoughton had reason to be familiar with Hingham real estate in the early 1680’s.  In 1681, Hingham needed a new church, but a dispute arose about where to locate it.  The decision where to build what would become Old Ship Church was elevated to the General Court, which appointed an oversight committee, on which Stoughton served.  The Committee determined that the Church would be located on property purchased from Captain Joshua Hobart, adjacent to the parcels involved in the New England Company financing two years later.

From the Salem witch trials to the Praying Indians and back to Old Ship Church, this one old deed shows just what a small world 17th century Massachusetts Bay was.