On Friday, May 14, 2021, the Hingham Historical Society awarded Marion Teague the designation “Hingham History Maker,” to honor her pioneering role in researching and preserving the history of Black and Indigenous people in Hingham.  At a necessarily small (owing to COVID restrictions) ceremony at Harbor House in Hingham, State Rep. Joan Meschino presented a citation from the Massachusetts House and Senate to 98-year old Marion and congratulated her on a “life well-lived” in the Town of Hingham.  Paula Bagger, President of the Society, spoke about Marion’s eventful life and work and presented a framed “History Maker” award.  Paula’s remarks may be read here.  Additional tributes to Marion were offered by Elizabeth Dings, on behalf of the Hingham Historical Commission; Joseph Collymore, of Harbor Media and also a longtime family friend; the Rev. Geoffrey Dana Hicks of Hingham’s First Baptist Church; and Marian’s daughter, Joyce Barber.  Katie Sutton attended as a representative of the Hingham Unity Council and Marian’s family and friends filled out the highly appreciative audience. 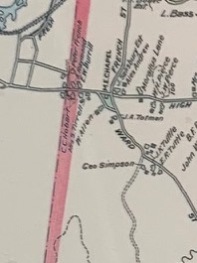 Marion is being celebrated for the pioneering role she has played in helping to preserve the history of Tuttleville, a two hundred year old Black neighborhood around Ward and High Streets in Hingham, and its families, some of whom have lived in Tuttleville throughout those two centuries. The eponymous James Tuttle (1780-1834), was the first Tuttle in Hingham, and he settled in the Ward Street/High Street area around the turn of the 19th century.  He was preceded as a landowner in the area, however, by members of a Black family named Humphrey; on November 29, 1801, James Tuttle and Rebecca Humphrey (1797-1843), a daughter of that family, were married by the Rev. Nicholas B. Whitney at Hingham’s Second Parish. 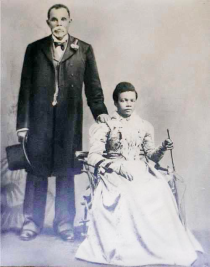 Believed to be John Tuttle and his half-sister Betsy. Photo in collection of Hingham Historical Society

James and Rebecca’s son, John Tuttle (1810-1886), described in the federal census as a farmer, was an important member of this growing Black community, as was his half-brother, James King Tuttle (1834-1906), whose mother was James Tuttle’s second wife, Margaret Quacum Leonard (1796-1806).  James King Tuttle was a shoemaker; many of the Tuttles worked in the shoe factories then operating in Weymouth.  John and James King Tuttle were instrumental in the founding of a village church, the Free Christian Mission, in 1876.

Lewis Legare Simpson as a member of the GAR

Marion’s grandfather, Walter Thomas Tuttle (1859-1931), was a son of James King Tuttle and Henrietta Simpson.  Also employed in shoe manufacturing, he married Laura Vickers (1869-1931), from Worcester County.  Laura’s heritage was also Indigenous; she was a member of the Nipmuc nation.  Their daughter Mabel, who married Herbert Lindsay, was Marion’s mother.

So, once again, thank you, Marion Laura Lindsay Teague, and we look forward to continuing to discuss Hingham history with you for a long time!