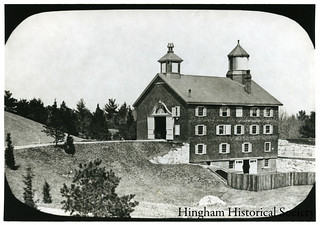 The “gentleman farmers” of the 19th century were men who typically had made their fortunes in that century’s industrial and commercial expansion and, only afterwards and as an avocation, applied the scientific and economic values and principles that had fueled their successes in those arenas to agricultural pursuits.  For instance, in 1856, wealthy Boston businessman John Brewer built a mansion along Martin’s Lane in Hingham, which later grew to encompass the twin drumlins of World’s End and the Hingham Harbor islands, and his son, Francis W. Brewer, built “Great Hill,” an estate off Hobart Street, now More-Brewer Park. (Shown here: a print from a glass plate negative of the barn at Great Hill, the foundations of which can still be seen in the park.) 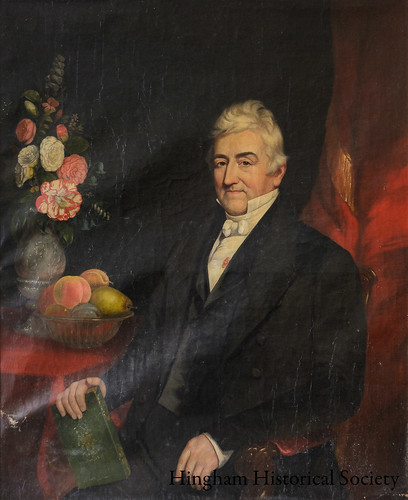 One prominent father-son duo of “gentleman farmers” with a strong connection to Hingham were both named Samuel Downer. The father, Samuel Downer, Sr. (1773-1854), was a Dorchester merchant with ties to shipping and the Massachusetts maritime economy.  He was a founder of the Massachusetts Horticultural Society and devoted horticultural experimentalist, known for having developed several new varieties of pears.  We have in our collection a portrait of the elder Mr. Downer, painted by Henry Cheever Pratt in 1840.  Mr. Downer chose to pose with fruit and flowers and a popular naturalistic work of the era called The Romance of Nature—all reflecting his desire to be remembered for his agricultural interests and not the trade and commerce that had led to his wealth and position.

His son, Samuel Downer, Jr. (1807-1881), was a pioneer in the development of kerosene and a participant in early petroleum exploration in Pennsylvania.  (Locally, he is known for having bought up most of Crow Point in Hingham and developed the mid-19th century resort Melville Garden.)  This Samuel Downer (photo at right) also cultivated fruit for a hobby.  One of his inventions was “Downer’s Late Cherry,” a useful application of scientific principles to farming: it bore fruit later than other varieties of cherry, effectively extending the local cherry season. 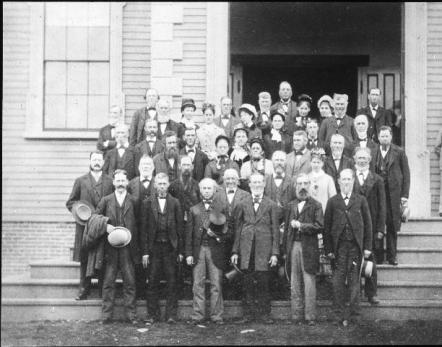 The Hingham Agricultural and Horticultural Society, founded in 1869, was also comprised of local men and women, many of whom were involved in industry, trade, and commerce.  (Here, they pose for a formal portrait in front of Hingham’s Agricultural Hall in the late 1880s or early 1890s.) As a society, they were earnestly dedicated to scientific farming, that is, using the progressive values of the 19th century and the power of new knowledge and industrial technology to “improve” agriculture along “modern” lines. At the agricultural fair each fall, prizes offered in different categories attracted many entrants. One could win a medal or ribbon—and an accompanying cash prize–for anything from crops and livestock to flowers and preserves.

The prizes offered for “Agricultural Experiments” demonstrate this interest in scientific farming.  A poster advertising the 1863 Agricultural Fair (detail reproduced below) offered prizes for the “best conducted experiment” in several areas, including for instance, “ascertaining the most economical manner of apply Manures for a crop of Indian corn, not less than ½ acre . . . .”

2 thoughts on ““Gentleman Farmers” of the 19th Century”