“Take me out to the ballgame” wrote Jack Norworth in his 1908 song of the same name. By that date, early in the 20th century, baseball had long been considered America’s pastime.

One reason for baseball’s popularity is its unique ability to unite generations.  It is a game that is inherently able to be played by people of all ages and as such has always been a unifying force within small American communities.

Whether it’s a sandlot game between neighborhood kids or a semi-formal league between towns, the game of baseball brings people young and old together under a common love of sport and competition. This was true in Hingham, where informal baseball teams formed as early as the 1870s.

More often than not, these teams were comprised of a mix of men, from schoolboys to middle-aged business owners to retirees, all of whom share in common their love of the game and their sense of community.

Preserved in the archives of the Hingham Historical Society are a number of photographs from this early era of America’s favorite sport. Team photos of Hingham men with their dapper uniforms and basic gear show us not only how frightening it must have been to be a catcher in those days but also how Hingham’s older and newer generations put aside whatever differences they may have had to come together and compete. 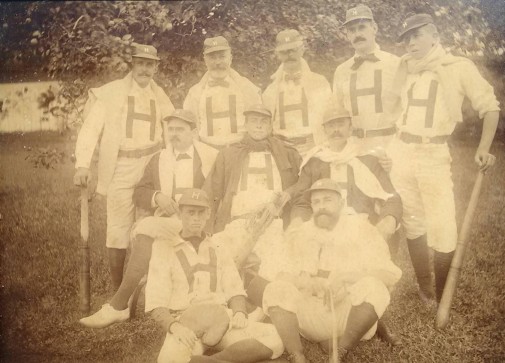 This picture, taken c. 1905, illustrates the demographic mix, with a teenager like Charlie Jeffries (back row, far right) playing on the same team as middle-aged William Blake (middle row, far right) and an elderly William Turner (back row, second from left). These men all pose with the same uniform proudly displaying the large Hingham “H.” 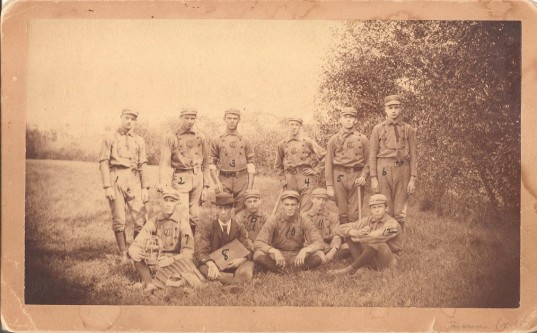 Other photos, like this one, depict a team comprised entirely of young men and boys, many of whom would go on to accomplish great things in our town.  This photograph, by amateur Hingham photographer Frank W. Reed includes himself as a player (back row, third from right) along with the bearers of many prominent Hingham names: Ripley, Howard, Lane and Stoddard, to name a few. One player, Wilbur T. Litchfield (back row, second from right) would go on to become one of Hingham’s very first electricians and would help to electrify Hingham’s streets and some of its first homes between 1896 and 1900. (Note the rudimentary catcher’s mask displayed at lower left. The “C” on the players’ uniforms may refer to Hingham Centre.)

As these young men grew, one thing typically stayed the same and that was a love for the game.  We can look at these images and quite literally watch some of these Hingham men age over time through their continued participation in the sport. James H. Kimball was a lifelong fan of the game, appearing in team photos as a young man here in Hingham, going on to play at Dartmouth and later returning to town to continue playing on several teams during his time working for his family’s lumber business on Summer Street.  About the photo below, Jim Kimball wrote

This shows the first Hingham ball team that I played on, in August, 1899.  I was a sophomore at Darmouth.  No larger crowd ever gathered than on that Saturday afternoon in August, when we played the first game against the team which was organized by the Rev. C.H. Porter.  It was a gala occasion and drew a big crowd. 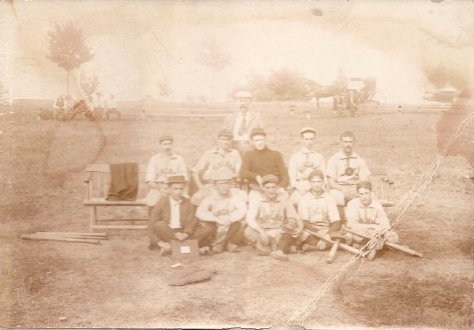 The photo below is of “Porter’s Players,” the Hingham team’s rival in the epic game Mr. Kimball remembered years later. (The Rev. C.H. Porter was pastor of the New North Church.)  They lost the August game, 8-4, and went on to lose a Labor Day rematch that same year, 9.6. 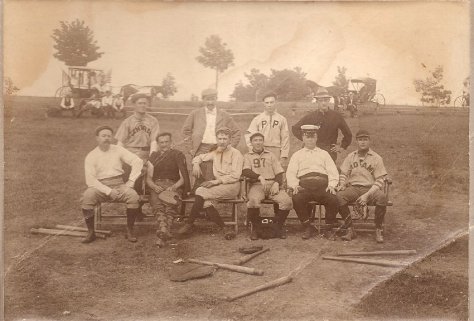 Teams started out in plain clothes, with no gear, playing “stick ball” before formally adopting the recognizable equipment and uniform style we see today. The one constant from those early days until now has been the sport’s unique ability to bridge the age gap. Today we recreate that camaraderie through our annual Vintage Base Ball game. Though when you look at these early photographs and watch our “modern” vintage game, one thing becomes abundantly clear: we are all the same. In this way, baseball provides us with a special way to visualize our same place in the community and realize that it just a continuation of generations long past. 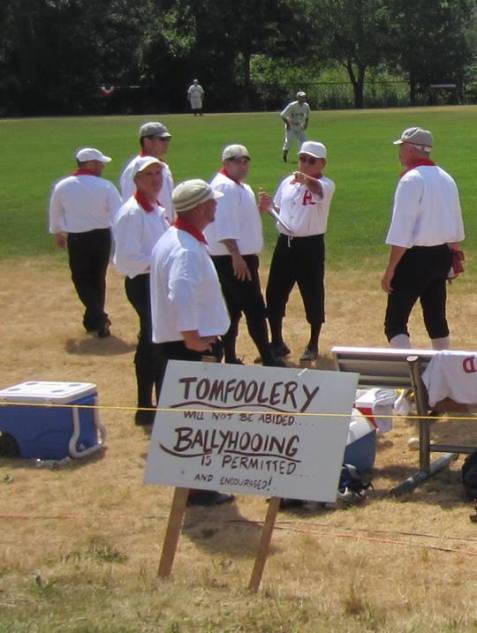