When she was young, Eliza Robbins of Milton enjoyed visiting the Barker sisters of Hingham. As an adult, she wrote a fond memoir of her visits to “The Misses Barker,” which she addressed to her younger sister, Sarah. Her essay, a typescript of which was placed in our archives by early society benefactress Susan Barker Willard, consists mainly of fond character sketches of the three maiden sisters who lived together on North Street in Hingham during the late 18th and early 19th centuries but also provides interesting glimpses of the Town of Hingham during that era.  According to Miss Robbins,

Deborah, Sarah and Bethiah Barker were daughters of Captain Joshua Barker of Hingham, Plymouth County, Massachusetts. Captain Barker belonged to a good family, when all the families were good—descendants of those primitive and pious colonists who first settled New England. He was a man of high honour, great benevolence and most amiable manner. . . . Mrs. Barker was the cousin of her husband and was the second of three sisters; the eldest died the widow of General Winslow and the youngest, Elizabeth, died single in the house of her nieces. The three sisters, especially the subject of this brief memo, never married.

Miss Robbins’ grandmother, Elizabeth Murray Inman, had owned a millinery business in Boston with the Barker sisters’ “Aunt Betsy” during the mid-1700s and, she explained, “between [the Murrays] and the Barkers an intimacy then commenced that was hereditary to the descendants of both the parties.”

Remembering her visits to the Barker home, which was located on North Street in Hingham Square (next to the present-day Post Office), Miss Robbins wrote:

That parlour was a delightful south room. The fervent heat of the summer sun was broken by the thick shade of a wide spreading plane tree that stood near the house and the glossy tresses of a dangling woodbine hanging over the windows softened the light that entered it, leaving spaces sufficient to look through upon the street to which the ground before the house covered with short velvet grass descended in a gentle slope. On the further side of the street lay the vegetable garden of the neighbor, along the borders of a little brook that ran through them toward the sea, which though out of sight was not far off. Beyond the gardens lay another street—behind that stood a hill on the top of which the villagers bury their dead. On the right hand—onward to the limit of vision, along the path way ran houses, those of traffic and mechanic art—the Academy and the spire of an old Church. None of these objects were picturesque but they had a character, they represented life and death, learning and religion, industry and competency, security and contentment. . . .

Detail from a map of historical names and places in Hingham. (“Barker Shipyard” belonged to the sisters’ uncle, Francis Barker.)

The basic layout that Miss Robbins describes is remarkably unchanged:  the house faces North Street, the bed of the former “Town Brook” (now the capped Greenbush train tunnel), and then South Street.  On the far side of South Street, Hingham Cemetery, Old Derby Academy, and Old Ship Church run south along Main Street ahead. 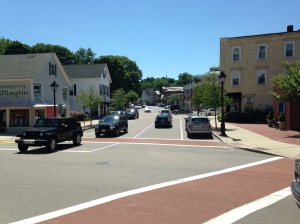 3 thoughts on “Visiting the Misses Barker”