Captain Gorfinkle returned to America after his service with the Peace Delegation was complete and continued his military service as part of the reserves. Promoted to Lieutenant Colonel, he organized many philanthropic campaigns to aid military service people in the Boston area between World Wars. One charitable effort involved the donation of pianos to military bases throughout New England and beyond, including the Hingham Naval Ammunition Depot. 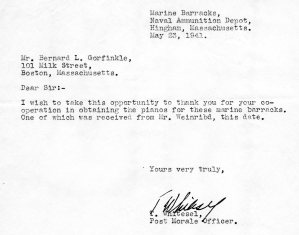 Colonel Gorfinkle continued his patriotic service in World War II, serving as a member of the War Manpower Commission, appointed by President Roosevelt to oversee the New England region. After the war, he remained active in the Reserves, serving as military attaché for Massachusetts governors Christian Herter (1953-1957) and John Volpe (1962-1965). He finally retired from Reserve service in December 1965—at the age of 71. Besides his law practice and military service, he was an active philanthropist in the Boston area, and chief among his interests were Beth Israel Hospital, the Newton Tennis & Squash Club, which he helped found, and Brandeis University.

The Colonel’s son, Herbert J. Gorfinkle, continued the family tradition of military service and was also involved in this country’s efforts during World War II. He was a member of the 381st Engineers Combat Battalion, which deployed to Europe following D-Day, serving as Unit photographer. His unit stayed in Germany for a year after the war helping rebuild that country’s infrastructure. His collection contains many photos of bridges over the Rhine River which his unit was helping rebuild. It also includes letters home to friends and family. 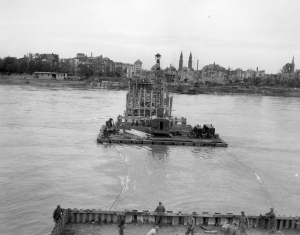 After the war, Herbert Gorfinkle completed his education at the University of New Hampshire in 1947 and then received a Master’s in Business Administration from New York University’s School of Retailing in 1948. He then started a successful career in the mercantile industry, serving as manager or founder for several successful retail chains including Jordan Marsh and the Edwards Stores of Boston. He and his wife, Connie, moved to Hingham from Braintree in 1972 and raised three daughters on Andrews Isle within the Home Meadows—near Hingham Harbor, which he helped champion as member (1983-1990) and Chairman (1988-1990) of the Harbor Development Committee. Herbert Gorfinkle was also a member of the Veterans of Foreign Wars Coast Guard Auxiliary and Commodore of the Metropolitan Yacht Club.

John Richardson of Hingham made the preservation of Hingham’s history his life’s work, amassing a large collection of Hingham-related books, furniture, artifacts, documents, and “ephemera.” He once wrote that he had “over 75,000 documents, diaries, journals, letters, surveys, maps, tax lists, photographs, etc.” in his collection, and the Hingham Historical Society was lucky enough to receive part of this treasure trove upon his death in 2011.  Three years later, we continue to work at cataloguing his substantial donations to our archives.

While most of the Richardson material chronicles the history of Hingham and lives of its citizens, some takes you into the lives of individuals outside of town and to places outside the country. One of these people was Colonel Bernard L. Gorfinkle (1889-1974) of Boston, whose father‘s family immigrated to the North End of Boston in the late 1800’s, when that neighborhood had a substantial Jewish population. Among the Richardson materials on which we are working are six three-ring binders and one box comprising the papers of Colonel Gorfinkle, as well as some of his son, Herbert J. Gorfinkle (1923-2000). The latter provided the Hingham connection, moving to town in 1972 and later giving these family papers to John Richardson. 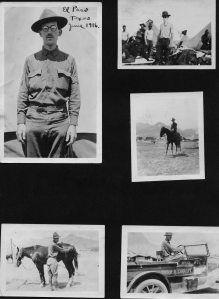 Scrapbook photos taken during the 1916 expedition after Pancho Villa

Colonel Gorfinkle was a lawyer. He graduated from Boston University Law School in 1911 but soon found himself heavily involved with this country’s military history. First, his Massachusetts Cavalry unit was called up to help Gen. John Pershing hunt down Pancho Villa along the Mexico border in 1916. His papers include his letters home, photographs, and postcards from his train trips to and from Texas and provide an interesting glimpse of our country prior to World War I.

A decorated member of the American Expeditionary Forces in France, 1917-1918

Colonel Gorfinkle’s military adventures continued when he was again called up in 1917 to serve with the American Expeditionary Force in France after the United States entered World War I. Serving first as a lieutenant staff-member and then as Judge Advocate for the 106th Division, he was eventually promoted to Captain. He made many trips to the front, which he documented in letters and photos sent home, to participate in proceedings against both prisoners of war and American soldiers. His many letters, photos and postcards to family members recount both the exciting and the mundane aspects of life during war time. He spent the last months of the war in 1918 near the front in Verdun where he was wounded. For his service he received a Purple Heart, the American Service Award, plus five other military honors including those bestowed by France and Belgium.

Posing with the United States Peace Delegation in Paris

After the war, Captain Gorfinkle remained in France as part of the American Peace Commission delegation led by President Woodrow Wilson. He can be seen in the back row, under the arrow, of this photo of the United States delegation. 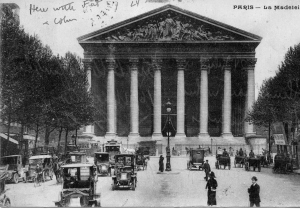 The portion of the collection from Colonel Gorfinkle’s time spent in Paris contains copies of transcripts of the meetings at the conference regarding the final settlement with Germany. On a lighter side, he also saved many postcards of the French capital and the surrounding cities he visited.

[Captain Gorfinkle’s experiences–and those of his son–as memorialized in this collection will be continued in our next post.]