“It would be impossible,” Francis H. Lincoln remarked in the 1893 History of Hingham, Massachusetts, “to give a complete list of all the social organizations which have existed in Hingham.” 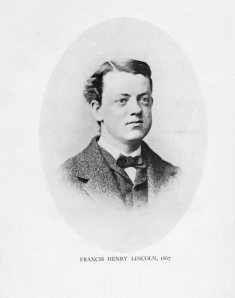 Lincoln knew whereof he spoke: he was known for his active engagement in his community’s civic, religious, and charitable organizations. Three of the nine paragraphs in his eulogy were devoted exclusively to his membership in various societies and organizations, of which 21 are expressly named. This does not include his service on Hingham’s School Committee for nine years starting in 1879 and as treasurer of the American Unitarian Association.

Although certainly more engaged than most, Francis Lincoln was not the only one in town to show such a diversity of involvement. Each of the two 19th-century histories of Hingham devotes an entire chapter to the discussion of Hingham’s various “Lodges and Societies,” patriotic and political associations, charitable organizations, and recreational clubs. At one point, just in the arena of music, Hingham boasted both a brass and a cornet band, two choral societies (in addition to the church choirs), and a Philharmonic (formerly the more humbly named Amateur) Orchestra. Two social libraries were formed early on, in 1771 and 1773, and lasted until Hingham’s public library was founded close to a hundred years later. Early in the 20th century, the Hingham Historical Society was formed by townspeople interested in Hingham’s venerable history.

Each generation reorganized the societies to its liking: the Jefferson Debating Society of the early 19th century gave way in the 1840’s to the competition-based Hingham Debating Society, which in turn morphed thirty years later into the Monday Night Club, a more informal discussion group. (Despite this “informality,” when it was Francis Lincoln’s turn to address the club on the topic of “The Systems of Taxation In Massachusetts” in April 1878, he went armed with 26 pages of notes—preserved in our archives.) One organization, founded midcentury as the “G. I. A. of Scribes and Pharisees,” hosted socials, parades, fancy-dress balls and other diversions for decades, but changed its name and officers so often that it reportedly became known as the “Phoenix Club” for its constant re-emergences.

Political societies became popular with several abolition societies in the mid-19th century. After the Civil War, they switched their focus to temperance (with differing approaches, from religious to scientific) and then women’s rights. The Hingham Women’s Alliance boasted men as well as women amongst its members, and the local branch of the Massachusetts Women’s Suffrage Association met at Loring Hall, receiving support from Hingham resident and then-governor of Massachusetts John Davis Long. 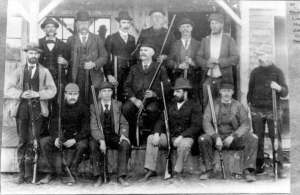 The community sustaining these myriad organizations was thus also sustained by them. In the early 1800s, facing a growth in population density that made both fire and thieves more common, townspeople founded the Society of Mutual Aid for Detecting Thieves and the Hingham Mutual Fire Society, both of which lasted through the century, promising to lend a hand when their neighbors’ belongings went missing or their buildings burst into flame. 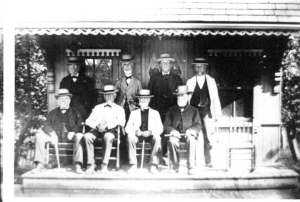 The social engagement and civic responsibility displayed in the Town’s profusion of associations and causes runs through its history, but the 19th century surely marked a high point in the number and strength of Hingham’s social organizations. Hingham was nothing less than a working example of what Alexis de Tocqueville saw as an explanation for the success of American democracy: our social engagement and investment in community created the interdependence that allowed our political processes (the process of voting and representation and compromise) to work. Or, as Francis Lincoln, club member extraordinaire, remarked in an essay written as a 15-year old student: “all the institutions of the land . . . are nurseries of learning, truth, and freedom.”

One thought on “Clubs and Societies in 19th c. Hingham”